The Famous Deities of the Giri Family 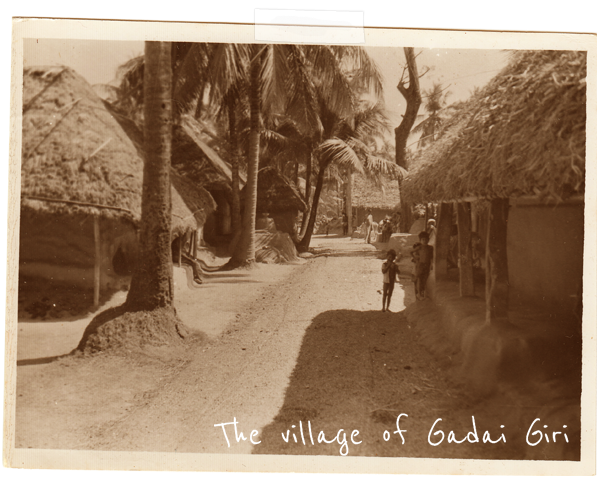 An ancestor of Gour Govinda Mahārāja named Śrī Gadai Giri founded the village of Gadāi-Giri in Orissa in the late 1600’s. Gadai Giri would come down from Midnapore, which today is part of West Bengal, to sell brass and metal items door-to-door. While on one such trip, he heard the auspicious sounds of a flute coming from the jungle, the tinkle of ankle bells and the blowing of a conch, intermingling with the calls of various birds. A local sādhu whom Gadai Giri had befriended, recommended that he make his home in that very spot, advising him that Lord Śrī Kṛṣṇa, the Supreme Personality of Godhead, must be present there, and wherever there is Kṛṣṇa, there dwells Goddess Lakṣmī.

Hence, all of Gadai Giri’s needs would be met if he were to simply remain there in adoration of the Supreme Lord. Thus Śrī Gadai Giri made a clearing in the jungle and built a thatched hut. He gave up his business, constructed a small temple to Dadhi Baman [Lord Jagannātha] and engaged full time in the glorification of the Supreme Lord, through kīrtana and study of the Śrīmad-Bhāgavatam. 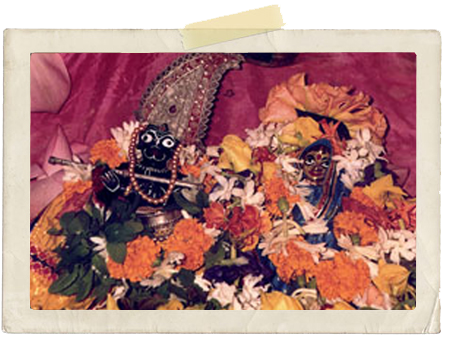 Gadai Giri had one son named Gopal Giri. He became a great devotee of Lord Jagannātha and a master of kīrtana. It was he who named the village after his father Gadai Giri. Gopal Giri intensely desired to worship a deity of Lord Kṛṣṇa from Vṛndāvana, however he had no way to make the pilgrimage to Vṛndāvana. At that time he was employed by the king as the poddar or cashier for the temple of Lord Jagannātha. Whilst working in Purī he frequently met the sādhus who came there and he would always request them to bring him a mūrti of Gopāla from Vṛndāvana, however his many requests remained unfulfilled.

Now, at that time there was a bābājī (Vaiṣṇava mendicant) in far away Vṛndāvana who was worshipping a deity of Lord Gopāla. While the bābājī went out daily, begging alms, the deity would accompany him in a cloth bag. One night the bābājī had a vision in which Lord Gopāla ordered the renunciate to take Him to Purī, because He desired to stay with Gopal Giri and hear the Gadāi-Giri kīrtanīyas. At first the bābājī disregarded the command of the Lord, thinking it was just an ordinary dream. Therefore a few days later, the Lord appeared again, this time soundly beating the bābājī. The bābājī awoke in pain and fervently apologized to Lord Gopāla for ignoring His order. He immediately began the trek, walking from Vṛndāvana to Purī. Gopal Giri was well known in Purī and the bābājī had no difficulty in locating him.
When they met, the bābājī handed over his Gopāla deity requested in the divine instruction. When he showed his wounds to Gopal Giri, he healed them by his mere touch. Gopal Giri offered the bābājī as much money as he liked, however he declined, requesting instead that he remain with Lord Gopāla as his pūjārī.

Gopal Giri resigned from his post at the Purī temple, returned to the village of Gadāi-Giri and had a brass deity of Śrīmatī Rādhārāṇī made and the divine couple Śrī Śrī Rādhā-Gopāla Jīu adorned the village temple altar. The village of Gadāi-Giri is most famous, the deities from Gadāi-Giri Śrī Śrī Rādhā-Gopāla Jīu are most famous and the Giri family are famous in Orissa as they are seen as kīrtana gurus. It was in this family that Gour Govinda Swami took birth.