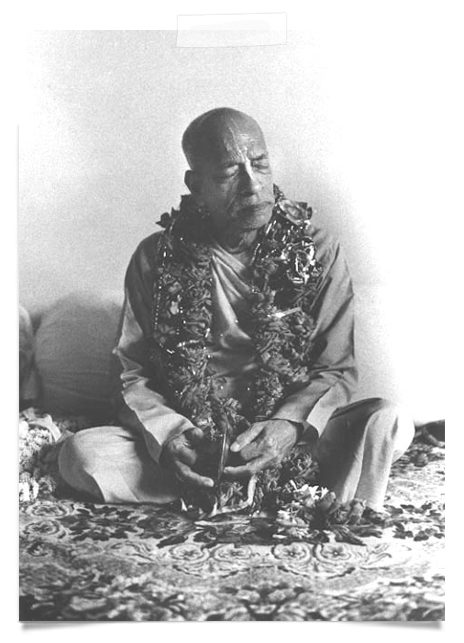 His Divine Grace A.C. Bhaktivedanta Swami Śrīla Prabhupāda appeared in a family of Vaiṣṇavas (transcendentalists) in 1896 in Calcutta (Kolkata), India. He would chant Krsna’s holy names, take part in kīrtana, organise his own little Jagannātha Ratha-yātrā festival, perform in plays based on the Lord’s līlās, transcendental pastimes, and being musically adept, he mastered the mṛdaṅga (drum) at a young age. His father Gour Mohan De taught him the Vaiṣṇava way of life from birth. Thus the seeds were sown for the pure devotee to lead a revolutionary spiritual organisation and present Kṛṣṇa consciousness, sanātana-dharma, the timeless wisdom of the soul, to the Western world.
[divider]

Śrīla Bhaktisiddhānta Sarasvātī Gosvāmī Prabhupāda was a Vaiṣṇava from birth and so also was his father, the illustrious Vaiṣṇava saint Śrīla Bhaktivinoda Ṭhākura.

In 1950 Śrīla Prabhupāda retired from married life, adopting the vānaprastha āśrama (retired) order to devote more time to his studies and writing. He accepted the renounced order of life (sannyāsa) in 1959. At Rādhā-Dāmodara temple, Śrīla Prabhupāda began work on his life’s masterpiece: a multivolume commentary translation of Śrīmad-Bhāgavatam (Bhāgavata Purāṇa). The Śrīmad-Bhāgavatam, an encyclopedic scripture, is often called “the cream of the Vedic literature” because it deals exclusively with the Supreme Lord, His devotees, His transcendental pastimes, and the science of bhakti-yoga, or devotional service.

In 1965 Śrīla Prabhupāda embarked on his historic journey to the West on the cargo ship Jaladuta. In August 1965, a few days before his sixty-ninth birthday, he left India with a crate of his Śrīmad-Bhāgavatams, a pair of hand cymbals, and forty Indian rupees (about seven dollars at that time). 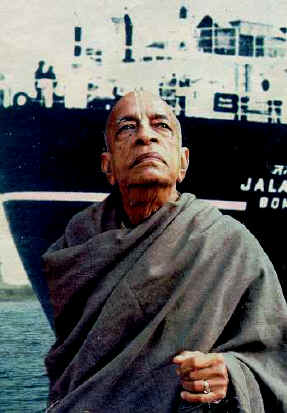 The Jaladuta docked at Boston harbour on September 17, 1965. The transcendental wisdom of the East (India – Bhārata-varṣa) was now to walk upon the soil of the West, (USA) via the agency of His Divine Grace Śrīla A.C. Bhaktivedanta Swami Prabhupāda, Kṛṣṇa’s pure devotee, who had arrived and was ready to pursue, at all costs, the mission of his divine spiritual master Śrīla Bhaktisiddhānta Sarasvatī Ṭhākura Goswami Prabhupāda Mahārāja, to preach the glories of Śrī Caitanya Mahāprabhu (The Golden Avātara) throughout the western world. And to spread the yuga-dharma for the Kali-yuga the transcendental chanting of the Holy name of the Lord:

Then for twelve years His Divine Grace Śrīla A.C. Bhaktivedanta Swami Prabhupāda travelled the world fourteen times, preaching in large cities as well as remote places on the planet to fulfill the desire of the previous ācāryas and his divine spiritual master, proving that he was definitely the Yuga-dharma Ācārya; a trancendentalist from the spiritual world. A transcendental emissary, who had come to deliver the fallen conditioned souls of this Kali-yuga.
He produced sixty large hardbound books with translations from Sanskrit to English, with extensive commentaries, as well as many small and medium editions. His books have been translated into more than seventy languages. He inspired the opening of more than 108 temples, vegetarian restaurants, schools and farms. He initiated the Bhaktivedanta Institute, and provided the framework for the introduction and implementation of varṇāśrama-dharma, whereby He Built a House For The Whole World to Live in.

His Divine Grace Śrīla A.C. Bhaktivedānta Swami Prabhupāda accepted many disciples from all over the world, including Gour Govinda Swami who often remarked, “If Śrīla Prabhupāda had not come to this world where would we all be now?”
[divider_top]