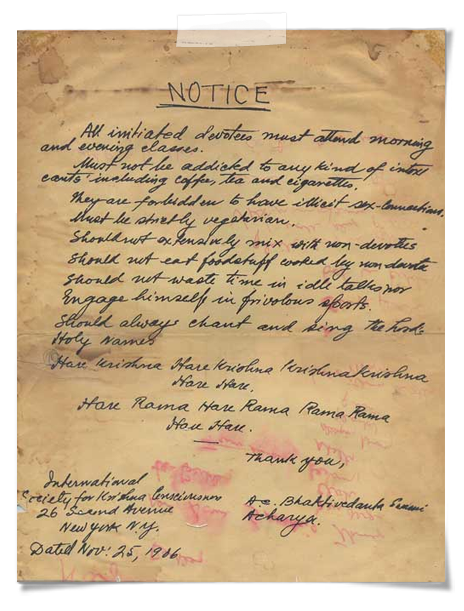 As Śrīla Prabhupāda famously said, “books are the basis; utility is the principle; preaching is the essence”, but most importantly “purity is the force”. Throughout his entire life Gour Govinda Swami Mahārāja was a pure vegetarian, he did not consume meat, fish, eggs, poultry or even garlic and onions. He never took any kind of intoxication, never gambled (no lottery or stock market) and never indulged in illicit sex, either inside or outside of marriage. He did not listen to the radio, never went to the cinema nor watched television. He never in his life entered a bar or hotel for the purposes of drinking alcohol. He never read mundane literature. Gour Govinda Mahārāja chanted the Hare Kṛṣṇa mahā-mantra from his childhood and read the Śrīmad-Bhāgavatam regularly from the tender age of six. He would regularly read and study the Śrī Caitanya-caritāmṛta from the age of twelve. From the age of seventeen Gour Govinda Swami began a serious study of the four Vedas, 18 Purāṇas and the 108 Upaniṣads which kept him up late at night, but he would still rise between 3.00 am and 4.00 am and maintaining a rigorous program of sādhana and would not sleep more than two to three hours a night.
[divider]

This was his routine life prior to joining the movement. As a matter of fact it would be many years before he came to know about ISKCON. At that time there was no ISKCON temple or preaching centre in Orissa. However, because of the prominence of the Jagannātha culture in Orissa as well as his birth and upbringing in a family of great devotees, Gour Govinda Swami was already fixed in all the principles of Vaiṣṇavism. He did not need to join a spiritual organisation or religious society to learn to abide by the regulative principles. He was following purely prior to joining ISKCON. His whole family was following purely. Well-wishers and observers have made the comment that he was a saint within ISKCON. Śrīla Gour Govinda Swami came to this world pure, and never deviated from the Vedic principles whereby he set up the example and taught devotees philosophically and practically by his own exemplary personality.