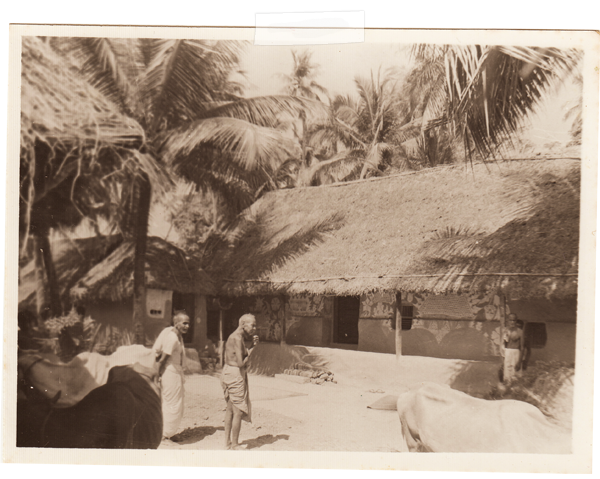 Gour Govinda Swami appeared in this world on 2nd September 1929 in the village of Jagannathpur, (corresponding to the appearance day of Śrīla Bhaktivinoda Ṭhākura, the year was, obviously, different 1838) in the Indian state of Orissa [present day Odisha]. Both the paternal and maternal sides of Gour Govinda Swami’s family have been Vaiṣṇavas for hundreds of years, dating back to the time of Śyāmānanda Prabhu, and prior to that, in Bengal for many centuries.

Once a famous astrologer-mystic named Nityānanda Khāḍiratna traveled from Dhenkanal in Orissa and stayed two days in Gadāi Giri the famous village of the ancestors of Gour Govinda Mahārāja. At that time Gour Govinda Swami was a small child and along with his mother, Pata Dei, was staying at his uncle’s house in Gadāi-Giri. Pata Dei took her son to the astrologer, desiring to know something about his future.

The astrologer–mystic prophesied, “This boy is very intelligent and filled with devotion. He will marry and earn his livelihood in government service. In his middle age he will renounce family life and become a sādhu. He will acquire higher knowledge and gain an important place on the map of sādhus. He will build temples and make Gopāla’s [Śrī Śrī Rādhā-Gopāla Jīu the family deities] place bright.” Of course this all came to pass.

Lastly the astrologer–mystic said, “Kṛṣṇa (God) Himself has sent this child from His eternal abode to the material world for preaching His eternal message and for the deliverance of the fallen conditioned souls.”
[divider]

Gour Govinda Swami said that the first memories of his childhood were of hearing the songs of Narottama-dāsa Thākura sung by his uncles, who were famous kīrtanīyas (devotional singers), mystics and great devotees of Lord Kṛṣṇa. From a young age Gour Govinda Swami was immersed in the teachings of the Śrīmad-Bhāgavatam, the Rāmāyaṇa, the Mahābhārata, the Caitanya-caritāmṛta and Śrīmad Bhagavad-gītā, as taught to him by his father, uncles and grandfather.
Gour Govinda Swami’s life was by no means ordinary. He remembered that his father, grandfather and uncles all kept a śikhā, wore kaṇṭhi-mālā, chanted the mahā-mantra on beads and wore Vaiṣṇava tilaka.

His grandfather, Bauribandhu Giri, who was a famous kīrtanīya and a great devotee, taught him how to chant Hare Kṛṣṇa, from when he first began to speak.
As a child Gour Govinda Mahārāja would go to sleep with the Śrīmad-Bhāgavatam clasped to his chest, and at a very early age had memorised much of the Śrīmad-Bhāgavatam.
[divider]

The Passing of Bauribandu Giri
The Grandfather of Gour Govinda Swami

Whilst Gour Govinda Swami was staying at the famous village of his ancestors at Gadāi-Giri, his grandfather Bauribandhu passed away. This was no ordinary occurrence. It was one day prior to Māgha–saptamī, (which is also known as Advaita-saptamī), and is a very auspicious day. It is the seventh day of the waxing moon in the month of Māgha, which is the appearance day of Śrī Advaita Ācārya, the avatāra of Mahā-viṣṇu. That day Bauribandhu Giri declared, “Tomorrow is Māgha–saptamī. I must leave my body tomorrow and leave this world.” He requested that all his friends, relatives and the local villagers come to see him and perform kīrtana, nāma-saṅkīrtana. Their chanting continued all night long.

The next day [Māgha–saptamī], on Saturday 28 January 1939, they placed Bauribandhu Giri under the open sky so he could see the sun, where all his family members were assembled. His eldest son Gopinatha Giri said, “Today is an auspicious day, and therefore many pilgrims will take bath in Konark where after they will go to Purī to have darśana of Lord Jagannātha. The pilgrims are on their way to Purī now.” Bauribandhu Giri asked his son, “Is the road clear to Purī?” Gopīnātha Giri looked to the sky and replied, “Yes, the pilgrims have left Konark and are now in Purī.” Upon hearing this, Bauribandhu Giri replied, “Then I will leave my body now, I will go to Jagannātha now.” At that time, Bauribandhu Giri gave up his body and entered into the Lord’s pastimes.

As a boy of only ten years, Gour Govinda Swami, witnessed the extraordinary way in which his grandfather left this world during a mighty kīrtana. His grandfather Bauribandhu Giri was actually able to choose the day and time he departed from this world.

My maternal grandfather lived to 69 years of age. I was there when my grandfather left this world; I was a young boy. No one was upset everyone understood. ‘Purusottama-dhama’—‘The road to Jagannatha is clear,’ and he said, ‘Yes, I must go now.’ My grandfather was a very great devotee, a paramahamsa.”

Bauribandhu Giri left behind him three sons, Gopīnātha Giri, Jagannātha Giri, and Dinabandhu Giri, and two daughters, Pata-devi and Hade-devi. As the eldest son Gopīnātha Giri was entrusted with the service of the famous deities Śrī Śrī Rādhā-Gopāla Jiu and Their temple. Two of Bauribandhu Giri’s sons Gopīnātha and Jagannātha Giri were expert kīrtanīyas who always sang bhajans for Gopāla. These two extra-ordinary kīrtanīyas, who were the uncles of Śrīla Gour Govinda Swami, left this world in a similar way to their father.

Gopīnātha Giri’s son Ghanaśyāma Giri recalls, “In 1967 at the age of 72 my father Gopīnātha Giri called his (our) family and friends and told us, ‘I will leave this world on the upcoming agni-utsava day.’ [corresponding to the appearance day of Śrīla Narottama-dāsa Thākura, which was Friday 24 February 1967]. We stayed with him until he left his body that day during harinām-saṅkīrtana.

Govinda Giri [1845 – 1933], the great grandfather of Gour Govinda Swami, had also passed from this world on the agni-utsava in the month of Māgha.
The Gadai Giri kīrtanīyas, the family members of Gour Govinda Swami are the most famous kīrtanīyās in the land of Orissa and are regularly invited to perform kīrtana for Lord Jagannātha in Purī and they are considered kīrtana-gurus.