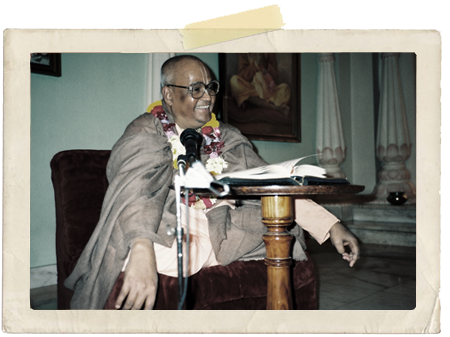 Vaisnavas are not bound by fruitive activities or forced to take birth, because learned persons have firmly declared that service to Lord Visnu is itself liberation.”

Gour Govinda Mahārāja had stated many times, “There are three things that are very important to me. One is that I want to preach to the preachers. It causes me so much pain to see the devotees falling down and going away. The second point is that I want to show how everything is in Śrīla Prabhupāda’s books. Those persons who are saying that Śrīla Prabhupāda only gave ABC, cause me so much pain in my heart, thus I want to make them silent. The third thing is that I want to show how all the tattvas, higher teachings, are in ISKCON, so there is no need to go anywhere else.” 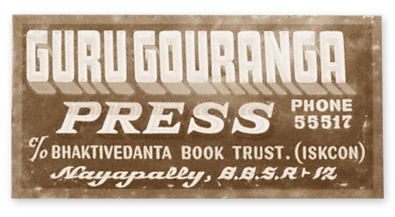 One of the main focal points of His Divine Grace’s preaching was in revealing the intimate connection between Purī-Bhubaneswar Dhāma, the glories of Lord Jagannātha, and the reason Śrī Caitanya Mahāprabhu stayed in Purī. Śrīla Gour Govinda Swami was able in his talks to lucidly convey very subtle truths of the Lord’s pastimes in Jagannātha Purī.
In Śrīdhām Māyāpura, on the 9th February 1996, the holy appearance day of Śrīla Bhaktisiddhānta Sarasvatī Ṭhākura Prabhupāda, some devotees came to see Gour Govinda Swami and enquired from him about the significance of Caitanya Mahāprabhu’s stay in Purī.

While deeply absorbed in narrating the intimate pastimes of the Lord, His Divine Grace, of his own volition left this world. Several astrologers had concurred that Śrīla Gour Govinda Mahārāja would live up to ninety years on this planet, therefore it is believed he prematurely left this planet of his own volition in much the same way many of his great ancestors had.

Śrīla Gour Govinda Swami Mahārāja dedicated his life to preaching tattva-vicāra, the absolute consideration, and uncompromisingly spoke out against aparā-vicāra, the apparent consideration. In his own unedited words Śrīla Gour Govinda Swami said, “I am stressing the tattva (truth). In all my lectures I stress on it, tattva-vicāra. Do you know the real tattva? You are all after this apparent consideration, not tattva-vicāra, that mistake is there. You do not know who you are, who is Kṛṣṇa, who is guru, who is a sādhu, and what is the relationship, these tattvas you do not know…”

Śrīla Gour Govinda Swami Mahārāja was expert in knowledge of the śāstras. He was able to dispel the doubts of those who came to him for shelter and spiritual guidance (sarva-saṁśaya-saṁchettā) and understanding. He would place great stress on chanting the holy name without offence, encouraging and inspiring everyone to achieve the transcendental state of chanting prema-nāma through prema-nāma-saṅkīrtana. He would always say, “Chant without offence. Chant the pure name and get kṛṣṇa-prema, get Kṛṣṇa in this very life!”

Vaiṣṇavas such as Gour Govinda Swami are very rare in this world. They do not appear in the material world due to the force of karma. They appear here out of compassion and the need to facilitate the Lord’s mercy upon the fallen conditioned souls.

The Padma Purāṇa has stated:

“Vaiṣṇavas are not bound by fruitive activities or forced to take birth, because learned persons have firmly declared that service to Lord Viṣṇu is itself liberation.”