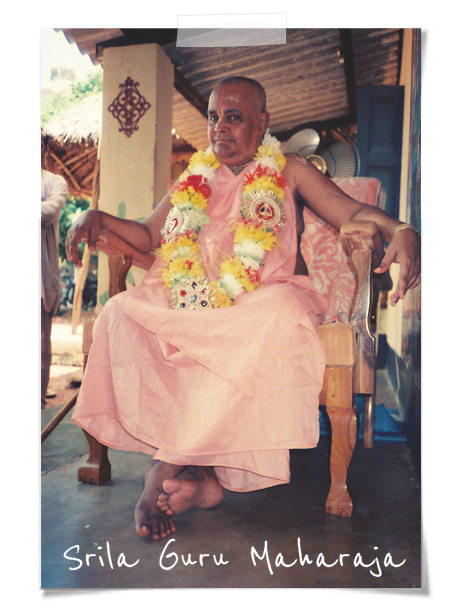 At the beginning of every class, before reading the verse of the day, Srila Gour Govinda Swami would recite many slokas glorifying Srimad-Bhagavatam.

Śrīla Gour Govinda Swami was widely respected as a scholar and teacher of Gauḍīya Vaiṣṇavism. He was realised in the knowledge of all tattvas of which the most prominent are, guru-tattva, bhāgavata-tattva, vaiṣṇava-tattva, nāma-tattva, jīva-tattva, gaura-tattva and prema-tattva.

His mission was to preach to the preachers in ISKCON by elaborating on Śrīla Prabhupāda’s purports, explaining how Śrīla Prabhupāda had given everything in his books.
What follows are short excerpts from the teachings (lectures and literature) of Śrīla Gour Govinda Mahārāja on these important philosophical truths.

His Divine Grace revealed through śāstric evidences that the bona fide guru (sad-guru) is kṛṣṇa-kṛpā śrī-mūrti, the embodiment of Kṛṣṇa’s mercy; svarūpa-śakti-puṣṭa-parikāra, empowered by the internal energy of the Lord; mukunda-preṣṭhā, very dear to the Supreme Lord Mukunda who bestows liberation from material bondage; gaura-priyā-jana, very dear to Gaurāṅga Mahāprabhu, and that he is rādhā-priya-sakhī, a dear intimate maidservant of Rādhārāṇī.

In other talks and lectures, quoting from a myriad of śāstra [scriptural references], Śrīla Gour Govinda Swami would patiently explain that to gain the highest benefit, the guru should be a premī-bhakta. In the Śrī Caitanya-caritāmṛta, Antya-līlā, 4.61, a premī-bhakta is described as one who is attached to Kṛṣṇa by love. After hearing this confidentially imparted knowledge, devotees would realise that the position of guru is very exalted and could not be imitated.

Gour Govinda Swami confirmed for many the absolute necessity of accepting a bona fide spiritual master, sad-guru. After many of his sannyāsa-guru godbrothers fell from their positions he presented in 1989 information on the subject of Guru-Tattva to the GBC members in order to console Śrīla Prabhupāda’s grand-disciples, so that they would not lose faith in Kṛṣṇa consciousness and spiritual life. This information has since been printed as a booklet and is available for free distribution.
[divider]

Śrīla Gour Govinda Mahārāja placed great emphasis on hearing the Śrīmad-Bhāgavatam daily, nitya-bhāgavata-sevayā, and explained that there are two kinds of bhāgavata: grantha-bhāgavata, the book bhāgavata, and bhakta-bhāgavata, devotee bhāgavata, who is the embodiment of the bhāgavata.

At the beginning of every class, before reading the verse of the day, Śrīla Gour Govinda Swami would recite many ślokas glorifying Śrīmad-Bhāgavatam. From Śrī Caitanya-caritāmṛta (Antya-līlā 5.131), he would emphasise yāha, bhāgavata pada vaiṣṇavera sthāne, ‘if you want to understand Śrīmad-Bhāgavatam you must go and approach a self-realised Vaiṣṇava and hear from him’. The sādhu only speaks kṛṣṇa-kathā, hari-kathā, bhāgavata-kathā. Therefore, by associating with that sādhu, uttama-adhikārī Vaiṣṇava this opportunity of hearing Śrīmad-Bhāgavatam from the right source is available to us whereby all our doubts will be dispelled.

Tattva should be explained by a tattva-darśī guru, a seer of the truth, because only one who knows and has Kṛṣṇa can give you Kṛṣṇa. This is the hearing process, śrutekṣita-pathaḥ. By following this bona fide hearing process all contamination in the heart is washed away and the anarthas [the contamination of the heart] are destroyed. After all obstacles on the bhakti path are removed one becomes attached to the Supreme Lord, who reciprocates and appears in the form His devotee desires to see. 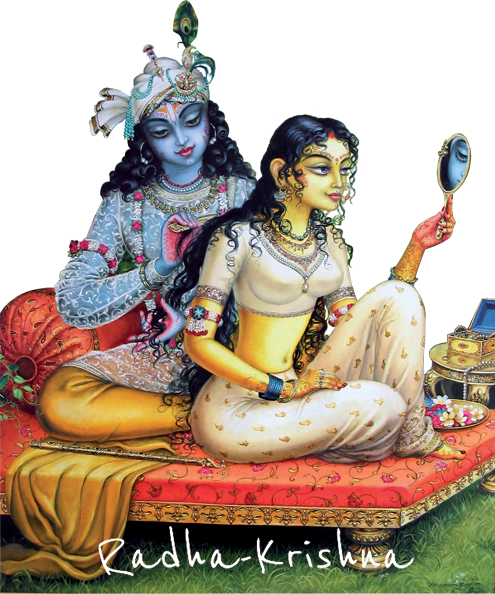 The following are (quotes) taken from lectures given by Śrīla Gour Govinda Swami on nāma-tattva.

“If you do not associate with a sādhu who chants the pure name, who is on the highest stage of prema-bhakti, you cannot chant the pure name. If you are associating with asādhus, non-devotees, then when you open your mouth to chant, only the alphabet is coming out.”

“For one who chants the pure name, who has prema, who has bound up Kṛṣṇa with the rope of love, there is no question of fall down at all. He is completely attached and Kṛṣṇa never leaves his heart.”

“If your chanting is without offence then you are chanting the pure name, śuddha-nāma, which is non-different from Kṛṣṇa. The pure name is prema-maya, full of prema. If you chant the name purely, that is prema, you will get Kṛṣṇa. The heart of one who chants śuddha-nāma is filled with the mellow of prema-rasa, and the eyes of such a devotee are anointed with the salve of love.”

“Mahāprabhu’s teaching is, ‘be as tolerant as a tree’, amāninā mānadena, do not demand respect, rather pay respect to one and all because a devotee thinks himself the lowest of the low. See everyone else as superior to you. Kṛṣṇa adhiṣṭhāna jāni, a devotee sees Kṛṣṇa everywhere. He sees Kṛṣṇa in the heart of everyone, kṛṣṇa adhiṣṭhāna, thus he pays respect. Respects are paid to Kṛṣṇa, not to the body. A sādhu always sees Kṛṣṇa everywhere in everyone, wherever he looks, such vision he has, yāhāṅ netra paḍe, tāhāṅ śrī-kṛṣṇa sphuraya, whatever his eyes fall upon he sees beautiful Kṛṣṇa. He never demands respect but rather he pays respect to one and all, amāni mānada. This is the proper attitude.”

“If one chants the holy name of Lord Kṛṣṇa in this manner, he will certainly awaken his dormant love for Kṛṣṇa’s lotus feet.” (Śrī Caitanya-caritāmṛta Antya-līlā 20.26) 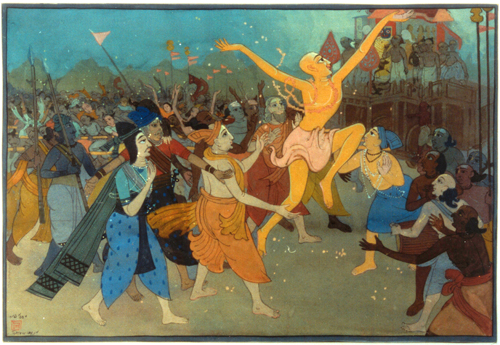 Kṛṣṇa’s final instruction in the Bhagavad-gītā is, sarva-dharmān parityajya mām ekaṁ śaraṇaṁ vraja, “Abandon all varieties of religion and just surrender unto Me. I shall deliver you from all sinful reactions. Do not fear”. After winding up His līlā at the end of Dvāpara-yuga, Kṛṣṇa went to His abode. There He thought, I have not taught practically how to surrender. The Kali-yuga people cannot understand it. I have to go again. Therefore He came again assuming the mood of a bhakta, as Gaurāṅga Mahāprabhu. Only this mood is different, otherwise there is no difference between Kṛṣṇa and Gaura. Gaura is Kṛṣṇa, Kṛṣṇa is Gaura. Gaura-līlā is kṛṣṇa-līlā, kṛṣṇa-līlā is gaura-līlā.

Kṛṣṇa comes once in a kalpa, in one Dvāpara. Similarly Gaurāṅga Mahāprabhu does not come every Kali-yuga. This is the special Kali-yuga known as dhanyā-kali, because Mahāprabhu has appeared. Those who are born in this Kali-yuga are very fortunate because Mahāprabhu has come to give kṛṣṇa-prema. In other Kali-yugas the aṁśa, portion, plenary portion of Gaura comes and introduces yuga-dharma, nāma-saṅkīrtana. However the aṁśa cannot give vraja-prema.

Kṛṣṇa said, no one can give vraja-prema but Me. Thus when Kṛṣṇa comes in the form of Gaura He gives vraja-prema. Although there is no difference between kṛṣṇa and gaura-līlā. Gaura-līlā is a more merciful and more relishable līlā than kṛṣṇa-līlā. Otherwise, in tattva there is no difference between the two. Navadvīpa-līlā and vraja-līlā are both kṛṣṇa-līlā. Rūpa and Sanātana Gosvāmīs, the dear associates of Mahāprabhu, have disclosed this tattva.

“On many different occasions Śrīla Prabhupāda has made statements concerning the origin of the jīva. He has also himself drawn conclusions. When the conclusion is given it is to be understood that it supersedes whatever was previously established. The conclusion is what stands.

For example Śrīla Prabhupāda gives the following conclusions regarding the origin of the jīva:

‘…The conclusion is that no one falls from the spiritual world, or Vaikuṇṭha, for it is the eternal abode…’ (Śrīmad-Bhāgavatam 3.16.26 purport)

‘…The conclusion is that the origin of all life is the bodily effulgence of the Supreme Personality of Godhead …’ (Śrīmad-Bhāgavatam 4.30.5 purport)

Devotees who have been fortunate enough to rise to the spontaneous service of Godhead, rāgānugā-bhakti, and who have developed an attraction for mādhurya-prema, may follow in the footsteps of the confidential associates of Śrīmatī Rādhārāṇī and their assistants the mañjarīs.

The bhāva-bandhana, the loving tie, loving bondage, between lover and beloved is eternal, ajara amara avināśī, it cannot grow old, it is deathless, and it cannot be destroyed. That is prema. That which is not eternal, that can be destroyed, and that which grows old is kāma [lust], not prema. However, when all causes for destruction may be there still it is never destroyed, that is prema. This takes place between the premī-bhakta and Bhagavān.