In 1974, at the age of 44, on Rāma-navamī, the Divine Appearance Day of Lord Rāmacandra, Gour Govinda Swami Mahārāja, after 23 years of household life, left and began travelling around India to search out a bona fide sādhu guru who would give him sannyāsa, in order for him to take to the preaching mission of Śrī Caitanya Mahāprabhu, which was the desire he had cherished from when he was a young boy. The route he followed was similar to that taken by Śrī Caitanya Mahāprabhu when He was on this very planet some 525 years ago and travelled on pilgrimage to many of the sacred sites of India. 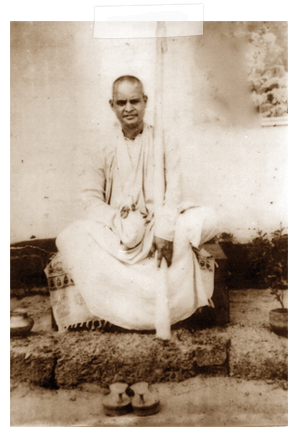 Gour Govinda Swami was in search of Śrī Kṛṣṇa, Śrīmān Chaitanya Mahāprabhu and Śrīmad-Bhāgavatam, and had decided for himself that where he found these three together he would stay and surrender. After travelling all over India and meeting many sādhus without success, he decided to go to Vṛndāvana, the land of Kṛṣṇa, in the hope that his desires would be fulfilled there.

By Kṛṣṇa’s divine arrangement Gour Govinda Swami found what he was looking for in the teachings of His Divine Grace A.C. Bhaktivedanta Swami Prabhupāda (1896-1977), the Founder-Ācārya of the International Society for Kṛṣṇa Consciousness (ISKCON). When he came upon the ISKCON land in Vṛndāvana, Śrīla Prabhupāda’s Western disciples who warmly welcomed him and handed him a copy of Back to Godhead magazine intrigued Gour Govinda Mahārāja. Merely by seeing the picture of Śrīla Prabhupāda in the magazine, Gour Govinda Swami recognised that he was a self-realised soul and understood, “This is my spiritual master”. 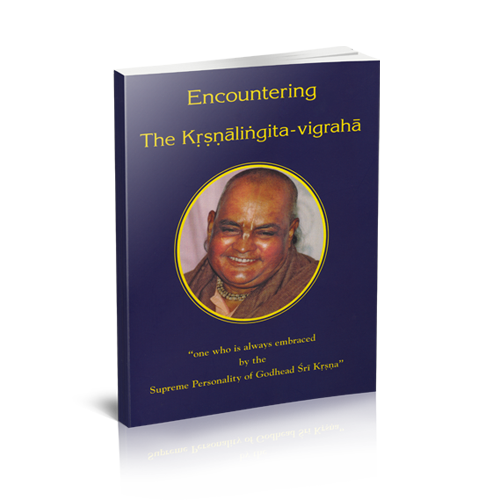 In volume one of Encountering the Kṛṣṇāliṅgita-vigrahā, the following is described by Guṇārṇava Prabhu, who was very fortunate to witness the meeting of two such rare personalities in Vṛndāvana, the sad-guru and the sat-śiṣya said:
…Prabhupada took a lot of care; he really took him [Gour Govinda Swami] close. They would spend a lot of time together…”

So Prabhupada took him right under his wing…”

…That is what I am saying he [Gour Govinda Swami] kept to himself, didn’t socialise; he was with his thoughts, he was with Krsna, he was thinking, he was very happy to meet Prabhupada, he saw Prabhupada as the real thing…”

…But Guru Maharaja, your Guru Maharaja wasn’t a foot soldier; you see, he was special; he had a special connection with Prabhupada…”

… See what I mean, it just expands on, it reconfirms what I’ve been saying that Prabhupada had a special relationship with him…”

It was one year to the day, after leaving family life and travelling the length and breadth of India in search of a bona fide guru to take shelter of, that in 1975, on the occasion of Rāma-navami, during the opening of the Śrī Śrī Kṛṣṇa Balarāma temple in Vṛndāvana, that Śrīla Prabhupāda awarded Gour Govinda Swami sannyāsa, thereby fulfilling the desire he had cherished his whole life, to take sannyāsa and preach the mission of Śrīman Caitanya Mahāprabhu all over the world.

One Reply to “Leaving home – Sannyasa”