I would stay in the Kutir which my dear disciple Gour Gobinda has made for me.”

Srila Prabhupad had stayed in that Kutir for 17 days long. He delivered daily Sri Chaitanya Charitamrita Classes. He had also completed the translation of 10th Canto of Srimad Bhagavatam in that kutir. That ‘Bhajan Kutir’ of Srila Prabhupad since then had been a sacred place of worship for your Divine Grace and devotees all around the world.

Oh Gurudev, causing tremendous pain to your Divine Grace this ‘Bhajan Kutir’ of Srila Prabhupad has been demolished.

Due to the influence of Kali or due to the offences of disciples and grand disciples of Srila Prabhupad that sacred ‘Bhajan Kutir’ of His was demolished on 6th August by the NHAI Authorities. It goes to show the utterly low position of ours, the devotees and our lack of commitment to the cause of Sri Sri Guru & Krishna, who daily chant “Jaya Srila Prabhupad! Jaya Srila Prabhupad!…. Prabhupad Amara Jivan….” but could feebly let the demolition take place. 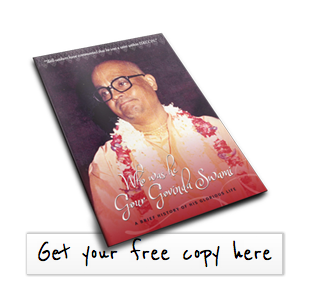